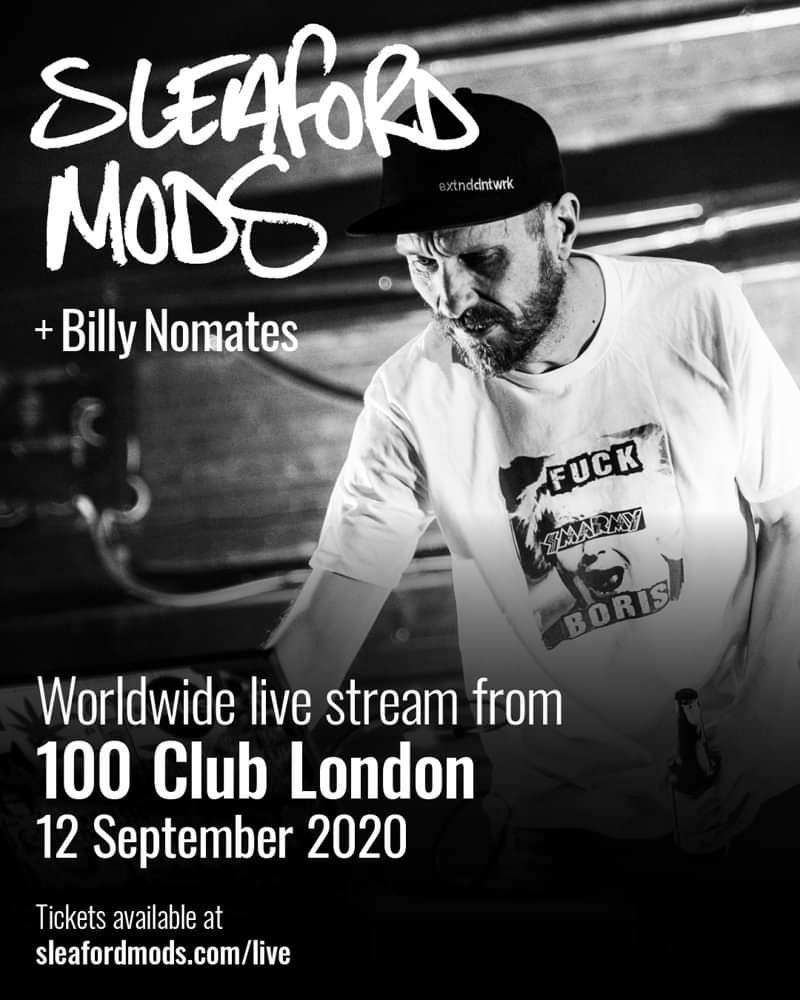 To mark the release of All That Glue we're doing a one off live stream gig from the iconic 100 Club London. The show will be shot with multiple cameras in Ultra HD with high quality audio mixed for broadcast and streamed live worldwide via YouTube. One ticket gets you the streaming link.

“No is a power any time, any place,” sings Billy Nomates on No, the centrepiece of her upcoming debut solo album. As manifestos go, it’s unequivocal. She’s done taking shit from the world.

This fierce, funny, outspoken force of nature, who hails from Melton Mowbray in rural northeast Leicestershire, but now flits between Bournemouth and Bristol, has arrived to rattle cages. To sock it to bearded indie cliques, old boys clubs in thrall to the Eagles, and over-privileged rich kids who think they represent us all.

“I wonʼt shave everything off, Iʼm not twelve,” she continues on No, defying the male gaze over a backdrop of stalking bass lines and art-punk riffs, before declaring: “No is gonna start a war, so die if you think it’s worth fighting for.”

The songs on her debut album, released by Geoff Barrow’s Invada Records, all come from a similar place of defiance. Rebellion against Brexit and your racist uncle. Against soul-sapping, dead-end jobs and zero-hours contracts. Against gender inequality, sexual harassment and festivals with obligatory female acts hidden in the small print. Billy’s songs lampoon the same bleak reality satirised by her beloved Scarfolk website and explored so abrasively in the fringe theatre she finds solace in.

This dissatisfaction and fury is made flesh and bone in songs that are candid snapshots of her life. “They’re 100% real,” she explains. “Maybe I’ve slightly changed names, but they’re all based on real encounters – the same lines of conversation, almost. Just given some poetic licence. That’s where my writing is: mirroring where I am. And maybe that represents where lots of people are.” Throughout No, Billy fixes the people that bring her down in her crosshairs. On the vexed and angular Happy Misery, she embodies those “horrible voices” who are always loudly declaring that things, no matter how grim their golden era actually was, “were better in my day”. Lurching along to cartoonish synths, the darkly comic Supermarket Sweep likens the monotony of minimum-wage employment to a killer disease. Escape Artist scoffs at the idea of social mobility (“I donʼt believe in this ladder you say is mine to climb / Nothing here belongs to me”), while Forgotten Normal People encapsulates the cul-de-sac of life that so many people live in. “I've tried Every Which Way Avenue,” she sings, and still nothing.

Dangerous, lecherous men in flashy cars are ridiculed on the growling, post-punk minimalism of Fat White Men, while on the feverish Hippy Elite Billy struggles to find her place in an environmental movement that she can’t afford to join. She hasn’t got enough time to work two jobs, eat lunch and breathe, let alone chain herself to a jumbo jet. “Hug a tree, for me / If I could only quit my job I’d join the hippy elite.”

“I’m not from a wealthy family,” she says, explaining the driving forces behind her songs. “I’ve always had minimum-wage jobs; I’ve always lived out of my pocket, because that’s where a lot of people end up – just the price of living. Being a woman, too. Not having as many creative options or as much of a right to do this or be taken seriously as a musician. I’ve experienced that, in life and in various bands – the struggle to be taken seriously.”

It’s an empowering approach to songwriting that only emerged after a turbulent period in Billy’s life. After doing time in those bands (mainly in Bristol, often folky), everything began to change a few years ago. Band members gave up on their dreams, close friends moved away, and a long-term relationship crashed and burned.

“I had a couple of months of bad depression, of not wanting to leave the house,” she explains. “I remember being sat in my sister’s kitchen and the toaster was on fire – like, properly on fire. I was at the table, not even looking at it. But, at the same time, there was this realisation of: Fuck! I need to grab hold of something and give it a fucking good go. So this really comes from that place.”

Music has always been an escape for Billy, through the good times and the bad. A constant presence in her life. Her dad was a music teacher and played in bands, and introduced her to “musical punky stuff” like The Stranglers, as well as folk music. Her first serious instrument was fiddle, but there was also a piano. “A really badly painted one!” she laughs. “Dad tried to paint it white like Lennon’s but it came out a creamy pink. It was slightly detuned as well, so my pitch is ever-so slightly off because I grew up with it.”

Billy knew how to play, then. She just needed a spark to get going again – and it came in the sweat-soaked, in-your-face, brutal honesty of a Sleaford Mods gig in Southampton in early 2019. “I was blown away,” she says. “They didn’t have a band, but they were the best fucking band I’d ever seen. I just thought: I’ve got energy in me like that.”

Finally inspired to start writing again, she recorded No alone in her bedroom, with just some live drums from her brother and a couple of bass lines played by a friend with a nicer bass. Musically, there are snatches of Nick Cave’s rumbling sprechgesang, minus the religion and the fucking; the “off-the-wall-ness of musicians like Captain Beefheart”; Sleaford Mods’ febrile post-punk; the groovesome lofi art-rock of Sonic Youth; and the brassy Americana of Emmylou Harris. What dominates, though, is a feeling of release. Of letting it all out.

“I love northern soul and how that came out of people with shit lives creating this incredible, restless energy,” she says, referring to the music and the scenes that emerge from the shittiest of times. “It inspires something inside of you to go: Okay, well, I’ve got all this energy now, so I’ll use it. There’s a hope that comes out of that, you know? Being uncomfortable will move you, and the hope is that you can find a way to do something satisfying with it.”

And she really has. Especially live. Sleaford Mods’ set-up showed Billy that she could perform alone, too – just her and a laptop. So when Keynsham’s Longwell Records booked her in for her first-ever solo gig, on the back of praise from Sleaford Mods, she spent hours in her garden, rehearsing on a stage built out of pallets found outside her local Co-op. “I’d put my headphones in and just figure out a show. Like, sod it. Maybe you should move about a bit. Maybe you should incorporate some physical aspect to it. You can see right over the fence,” she laughs. “I’m not bothered.”

The Billy Nomates live experience – which has already moved up the leagues from that tiny instore last summer to an acclaimed show at 100 Club, via an appearance alongside Idles and BEAK> at Bristol’s Give A Shit Xmas charity gig – is a thrilling, lost-in-the-moment spectacle. An angular, awkward display of involuntary dance moves and raging physicality that reflects her desire to provoke and cause a reaction. Any reaction.

“There’s a punk in me that likes anyone that takes things the way they should be, and says no,” she says. “There’s an element of me that wants to be disruptive, too; who’s like, get onboard or don’t, I’m not bothered. Not in a cocky way. You just see so many artists seeking approval, like they have to please everybody and be marketable. I like rawness.”

In other words: take it or leave it. But as the buzz around Billy Nomates continues to grow, with support from 6 Music and beyond, it seems like the majority of people who come across her are willing to climb aboard. With her reputation beginning to precede her, though, how will this bedroom-recording, garden-rehearsing solo performer continue to defy expectations?

“Like with everything, I’ll just go back to the garden,” she laughs. “Put my headphones in and see what happens. It’s the same with the music: I just mess about until something sticks. It’s great doing gigs, and progressing, but I can never replicate how I feel on my palettes in the garden. I’ve been at work all day, and then I step into a different world. No inhibitions. It’s just free.” 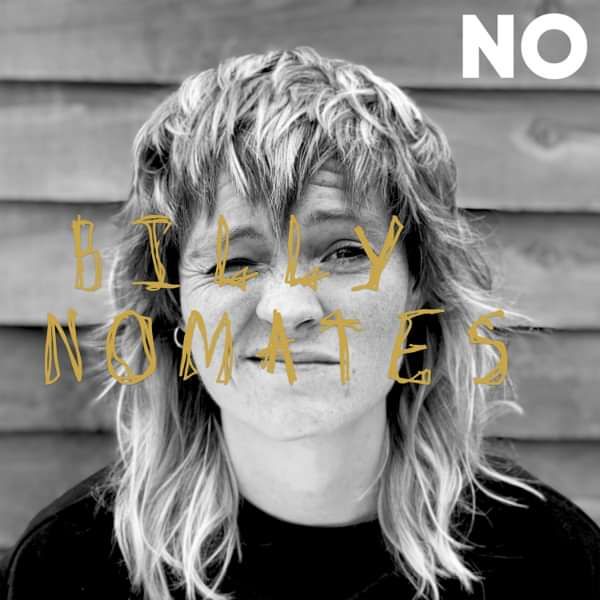